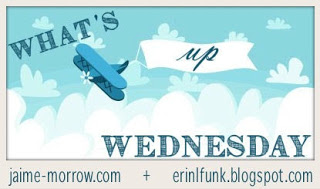 Time for a What’s Up Wednesday post (my favorite blogging check-in post).  If you haven’t seen this before, it was started by  Jaime Morrowand Erin Funk and is a great blog hop for connecting with other writers and regularly checking in on your progress. Edit: Sadly, I’ve just discovered this is the last one. Goodbye, sweet blog hop! Thanks Jaime and Erin for all your hard work keeping this together as long you did!

I just finished the fifteenth and final Morganvile Vampires book. Fifteen is a lot of books, and I know I’ve said it a million times, but I just hate when books are over. I’ve read around 10 of the short stories for the series since it was over, mostly as a way to avoid letting go.

I also recently read Frostfire and Across the Universe and Shifting Shadows, the Mercy Thompson short stories, and now I’m poking through a bunch of books again until one grabs me. I might end up rereading something, since that’s what I do when I’m like this.

Still writing my girl pop band versus zombies series, and wishing I’d titled the series already. I got stuck for a little while this week and plotted out five short stories for the series, which was ridiculously fun. This series. *shakes head* I just love it.

Goal: finish this draft this week?

WHAT WORKS FOR ME

WHAT ELSE IS NEW

I recently did an interview on Sarah Dalton’s blog, as part of the blog hop for the YA Spring Fling giveaway I’m part of. The giveaway has over 70 authors (and over 100 ebooks) up for grabs. All you have do is peek through the list and fill out a survey saying what books you’d like. No signing up for anything except the giveaway necessary.

I went to the Tucson Festival of Books last weekend! Saw a lot of authors on panels and generally wore my body out, but filled up my brain. Lots of great motivation. I love going to panels. I saw… Gail Carriger, Sam Sykes, Scott Lynch, Jonathan Maberry, Deborah Harkness, Elizabeth Bear… and others, but I’m blanking right now. It was a good time. Hurray for book festivals!

Since I finished reading the Morganville Vampires, I went ahead and watched the Geek & Sundry series, all six episodes. Anyone else read the books or seen the show?